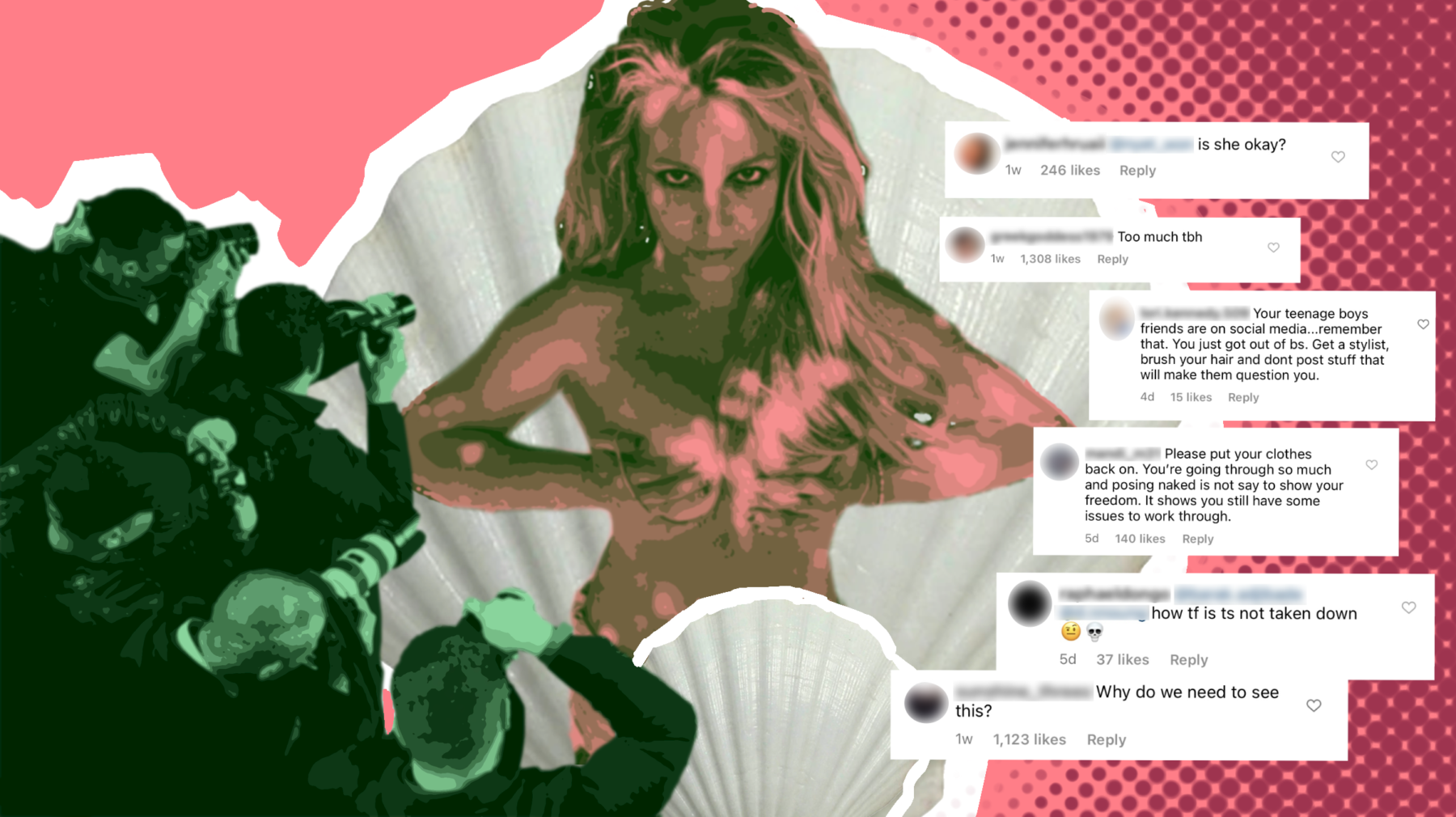 In November 2003, “the most famous 21-year-old on the planet,” Britney Spears, sat down with Diane Sawyer for a primetime television special. The now infamous interview was aligned with her soon-to-be-released fourth studio release, “In the Zone,” but the album was mainly sidelined for more “juicier” topics, including her tabloid-fueled breakup with Justin Timberlake, her much-talked-about virginity and The Kiss with Madonna. Fast forward to 2022 and the interview has since gone through a bit of a cultural re-examination due to The New York Times 2021 documentary, “Framing Britney Spears,” which shined a much-needed light on the misogynistic mistreatment of Spears in the aughts and the court-sanctioned conservatorship she was subjected to for over 13 years.

In the interview, Sawyer pressed Britney on what she did to cause Justin “so much pain”, how she felt about Kendel Ehrlich, the former Governor of Maryland’s wife, saying at an anti-violence rally that if given the opportunity, she would like to shoot the singer, and why Spears (an adult) was so willing to pose provocatively and unclothed for magazine covers. In response, Britney pushed back by saying, “It’s about doing a beautiful picture…You know what, I feel comfortable in my skin, I think it’s an OK thing to express yourself.”

Now, almost 20 years after the interview first took place, many on the internet are still questioning Spears and her choices as a 40-year-old woman. However, instead of Britney posing on a glitzy magazine cover, it’s on today’s public forum: Instagram. People who even supported the “Free Britney” movement, are now second-guessing Spears’ freedom, mental health, and if it was even right to “free” her, but is all this “outrage” rightly placed just because of her photographic choices? And in 2022, why are we still trying to tell women what to do with their bodies?

On Monday, May 9th, Britney “broke the internet,” for the umpteenth time. She didn’t announce new music or release the title of her upcoming tell-all book, but instead, she posted a series of five different Instagram posts, three of which featured her nude (with selectively placed emojis covering certain parts of her body). However, this isn’t the first time Spears has chosen to do this. Since being released from a controlling and restrictive conservatorship (one in which her father, Jamie Spears, secretly recorded Britney’s conversations in her bedroom and monitored Spears’ communications with her own lawyer) in November 2021, Britney has slowly (and more freely) expressed her opinions and body on Instagram. Throughout the last six months, she’s announced to her 41 million followers a pregnancy (and unfortunate miscarriage), the engagement to actor/fitness model Sam Asghari, and what she thought about being personally invited to speak in front of Congress regarding her case.

Sprinkled throughout these posts have been images of Britney’s body, taken using her phone’s camera and without any noticeable retouching. These posts usually garner the most attention and engagement, with many receiving over a million likes and thousands of comments. This is where many social media users have gone to express their “concern” for Spears, with many commenting that what she is posting is a “sign” of her needing a conservatorship or her father back in control of her life. However, given the circumstances of Britney’s situation, is it that hard to grasp why she might feel the “need” to post such things? Spears herself explained her reasoning in a now-deleted August 2021 caption. She wrote, ”Before I show you more pics of my body…I want you to understand my thoughts on exposing my skin !!!! In my opinion it’s quite twisted the immediate response of when any woman is hot and they want to shed a layer…I wanted to see myself in a lighter way … naked … like the way I was born and to me looking back at my pictures when I shoot it’s insane the psychology in seeing myself in my purest form…I am a woman …. a beautiful … sensitive woman who needs to look at myself in my purest form !!!”

Could Britney’s posts be an act of her reclaiming her own freedom and body, something that was hijacked from her in 2008? According to clinical psychologist Carla Manly, the answer is yes. “When our rights are violated and our freedom of choice is taken away, it’s very different from when we make a conscious, personal choice to divulge information or offer a selfie – whether it’s nude or not. So if indeed Spears feels this is her time to make this choice, it can be extraordinarily empowering since she is actively choosing to offer those visuals.”

Britney hasn’t been the only woman expressing herself in this way either. Through the years, many musicians and celebrities have gone nude as a way of self-expression. Madonna, Rihanna, Miley Cyrus, Lizzo and Kim Kardashian (to name a few) have all posted revealing pictures of their bodies on Instagram as a form of self-love and empowerment. In fact, the same week Britney posted her pictures on Instagram, Hilary Duff revealed herself on the cover of Women’s Health Magazine, fully nude. However, Duff’s cover was mainly celebrated and seen as being “body positive.” Why the double standard? Well, it’s most likely due to societal standards. Manly says, “If it’s done for a notable magazine, it’s seen as artistic. But when it’s done as a personal offering, that’s when judgment comes into play and it becomes ‘exhibitionist’ or ‘controversial.’ It’s about personal choice and us choosing what to show and what not to show.”

In the six months since Spears’ 13-year conservatorship ended, she’s slowly been trying to assimilate herself into a social media-driven society and experiment with what it means to be “free” in 2022. She’s adopted a cat and two dogs, traveled to Mexico & Hawaii (multiple times) and is in the midst of planning a wedding and writing a book.

At the same time, Britney has continued to receive hate, backlash and misogynistic comments on what she says and does, something she’s been plagued with since she reached superstardom at 16. However and through it all, Spears seems determined to blackout the negativity and focus on her freedom and what that means on her terms, nude selfie or not. In a January 2022 Instagram post, Britney poignantly wrote, ”Free woman energy has never felt better.” Spears has been singing about wanting to be allowed to stand on her own and make her own choices (without judgment) since 2001, so can we finally just let her be?