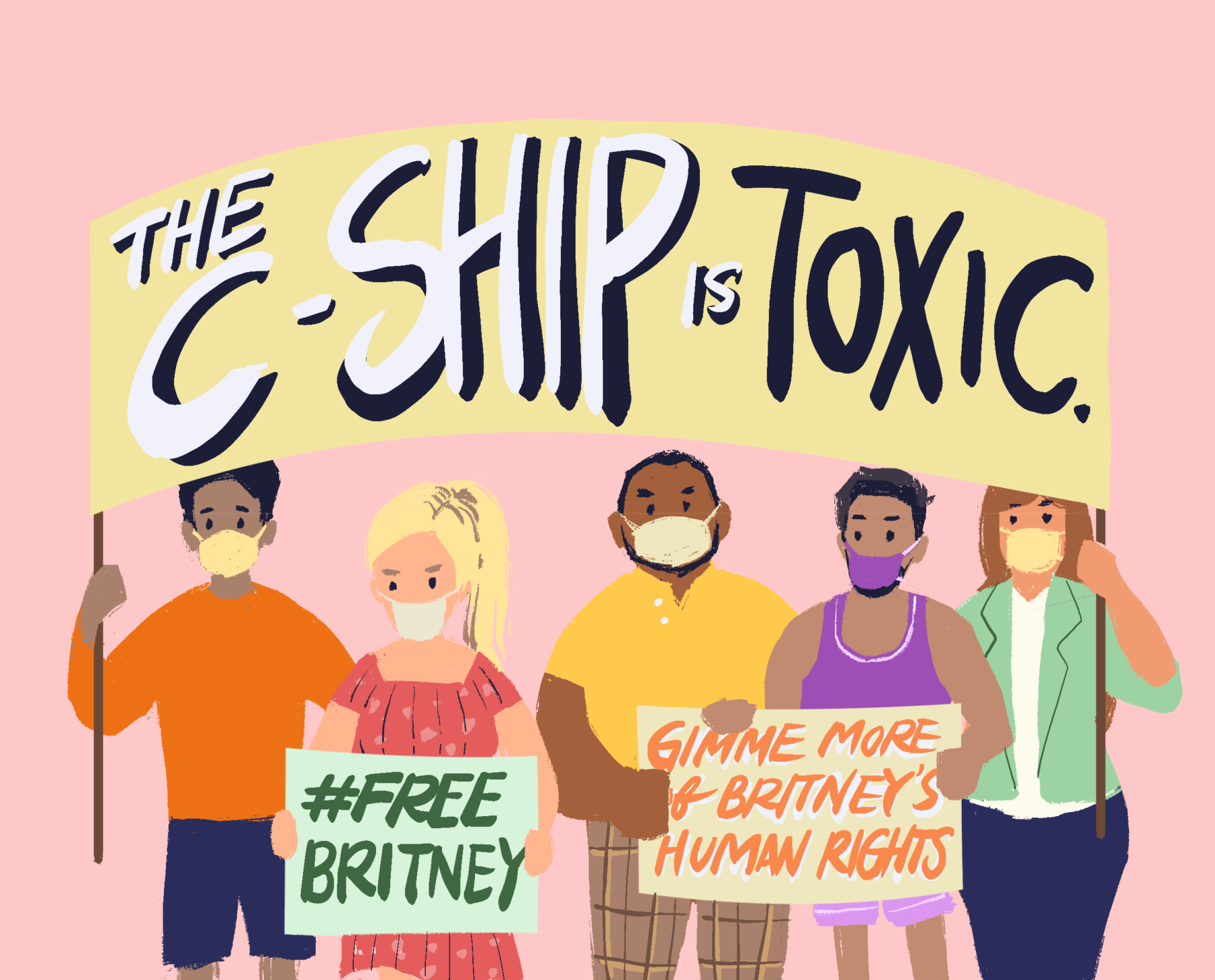 In the years since Britney Spears first became a global pop icon, a lot has changed. In fact, the majority of her most iconic moments in pop culture occurred before social media was even a thing. In the early ‘00s, what became a “moment” or not, was dictated by the mainstream media. Fast forward to 2020, and now almost anything and everything can become a meme or trending topic, just by the strength of users on any given social media platform.

While Britney has amassed over 128 million followers across all of her official social media accounts, her Instagram has become the focal point of her celebrity in recent times. Unlike many other important figures who use an extremely unrealistic, curated, and filtered approach for their feeds, Spears is the exact opposite. Through the years, her account has continuously showcased her eccentric side, with an endless stream of selfies, inspirational quotes, memes, flowers, and videos of her dancing or exercising. Seen as both honest and mysterious, her Instagram has become an enigma, so much so that two comedians created a whole podcast series, Britney’s Gram, dedicated to try and decipher its “hidden” meaning. Little did the two podcasters know that their show would eventually become the catalyst for the creation of the #FreeBritney movement.

HOW THE MOVEMENT BEGAN

The #FreeBritney movement came into the spotlight in April 2019, three months after Spears announced an “indefinite work hiatus” following the news of the sudden cancellation of her second Las Vegas residency, Britney: Domination. That same month, Britney’s Gram released an episode featuring a voicemail from a former paralegal that was associated with Britney’s conservatorship. A conservatorship allows a court-appointed guardian (conservator) to have full control over an individual’s personal and financial matters if that person is deemed physically or mentally “unfit” to manage their own affairs by the courts. After a very tumultuous and heavily publicized 2007, Britney was temporarily put under a  conservatorship by the courts in February 2008, at the request of her father Jamie Spears.

However, in October 2008, the temporary conservatorship was made permanent, which gave her father and a lawyer the power to make all of Britney’s personal and business decisions. In December 2008, she released her sixth studio album Circus, less than a year after she was put under the arrangement and two months after it was made permanent. In March 2009, she began a 97-show world tour in support of the album.

From the beginning, many fans questioned whether Britney’s conservatorship was in her best interests. During the next ten years, she would release three albums, tour the world multiple times, be a judge on the reality TV singing competition The X-Factor and have a highly successful Las Vegas residency. All of these significant moments in her career would occur while she was still labeled by the courts physically or mentally “unfit” to handle her own affairs. Specific details on Spears’ conservatorship have never been made public, but in general, “conservators like those in [Britney’s] case have the ability to make decisions about all aspects of her life — where she lives, where and how she spends her money, what medications she takes, who she spends time with, and other [key] decisions.”

Conservatorship (also known as guardianship in other states) abuse isn’t unique to Spears. According to Forbes, the U.S. Government Accountability Office  (GAO) found that “hundreds of allegations of physical abuse, neglect and financial exploitation by guardians [has been reported] in 45 states and the District of Columbia between 1990 and 2010. Guardians also stole $5.4 million in assets.”

As The New York Times reported, the Britney’s Gram episode “spurred some Spears fans to object to the continued restrictions on the pop star’s life, given what…appeared to be a [long] period of stability and success.” Protesting outside the Stanley Mosk Courthouse in May 2019 for a hearing on the conservatorship, fans took a public stand against it. At the hearing, a judge ordered an expert evaluation on the case after Britney requested for it to end. 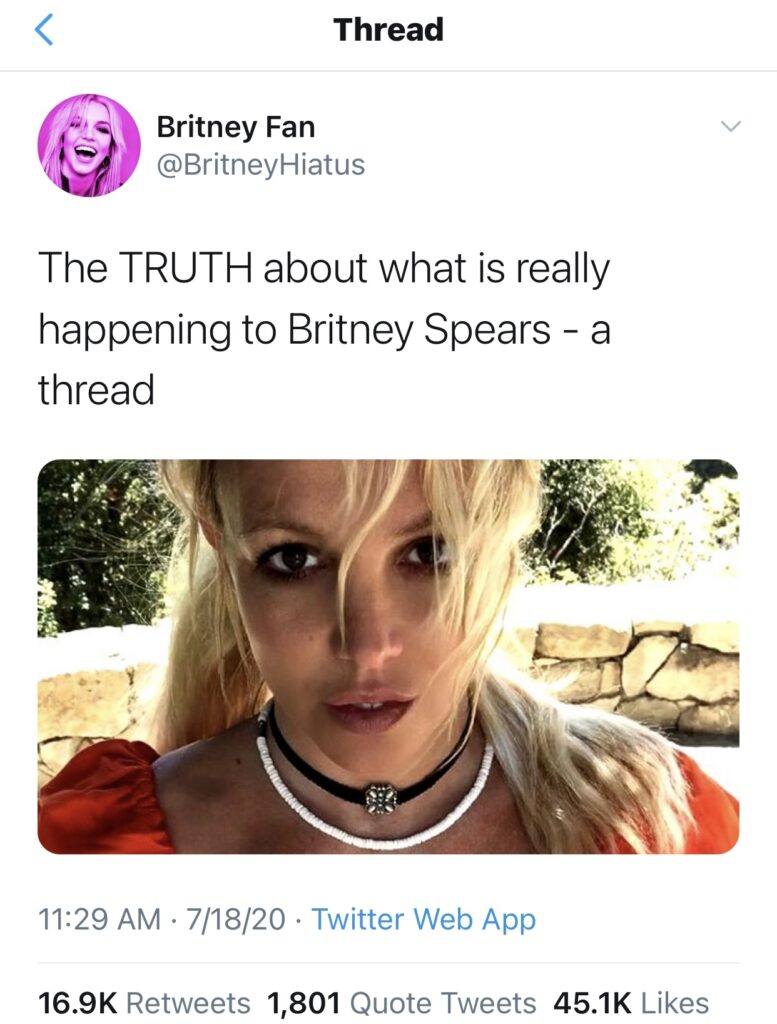 By July 2020, things had gone pretty silent for the #FreeBritney movement. After a judge ordered an expert evaluation on the case, there were many delays, mainly brought on by the pandemic. However, after Britney made a post on Instagram showing her support for the LGBTQ+ community, Gen Z took notice. In one video, a TikTok user questioned whether Britney was responding to a fan’s sign for help. The video went viral and immediately was reshared all over social media. Thanks largely to TikTok’s virality, the movement began having its resurgence. Soon after, dozens of users created their own videos questioning Britney’s posts and situation, which quickly spread across the Internet. As of this writing, the #FreeBritney hashtag has garnered over 286 million views on TikTok alone. Following this event, Twitter users began creating threads to help organize factual information about Britney’s situation and make it easily accessible for other users to learn more about it. Not long after, petitions from Change.org and the White House’s official website requesting for Britney to be relinquished from the conservatorship began to proliferate all over the platform. As of today, the two petitions combined have been signed by over 245,000 individuals. 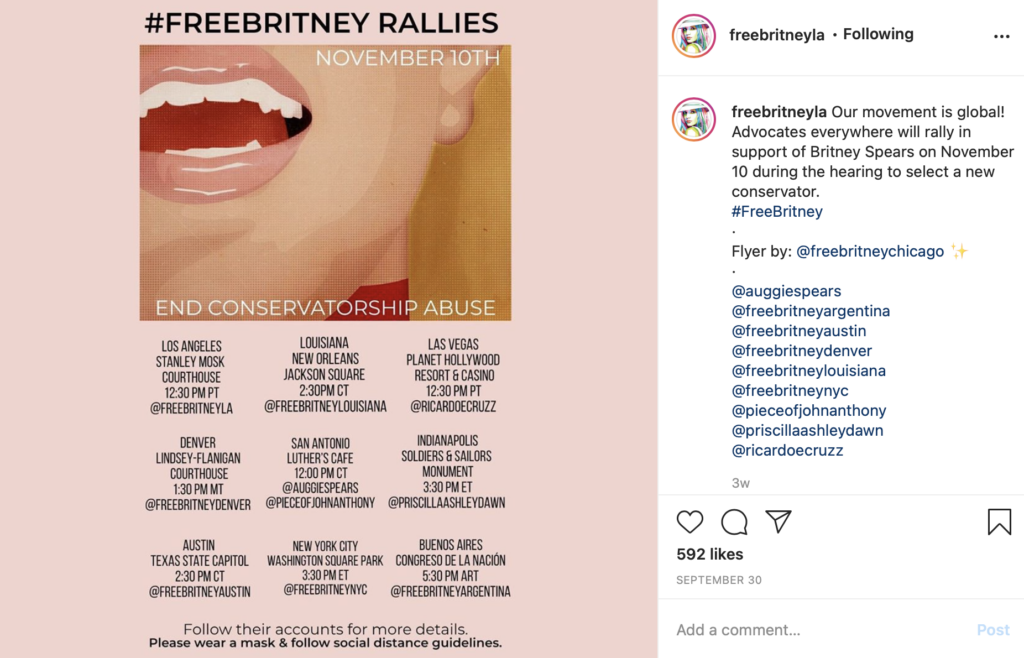 Additionally, fans advocating for Britney’s autonomy began utilizing Instagram to create accounts such as @FreeBritneyLA (which has grown to over 20,000 followers). Updated daily with details on Britney’s recent and upcoming court hearings, the accounts also help organize fan rallies to protest the conservatorship around the world.

Following the movement’s popularity across Instagram, TikTok and Twitter, the mainstream media realized the situation wasn’t just a “conspiracy theory.” Countless news organizations began covering the story, including the Los Angeles Times, The Washington Post, VICE and The Atlantic, which only helped keep the situation a top headline throughout the summer and into the fall. In August,  Britney requested in court documents that her father not return as the conservator of her person. Her father Jamie Spears had temporarily been removed by the courts in September 2019 after he got into a physical altercation with one of Britney’s sons, which led to the children filing a restraining order against him. That same month, the American Civil Liberties Union (ACLU) publicly showed support for Britney in a series of tweets. 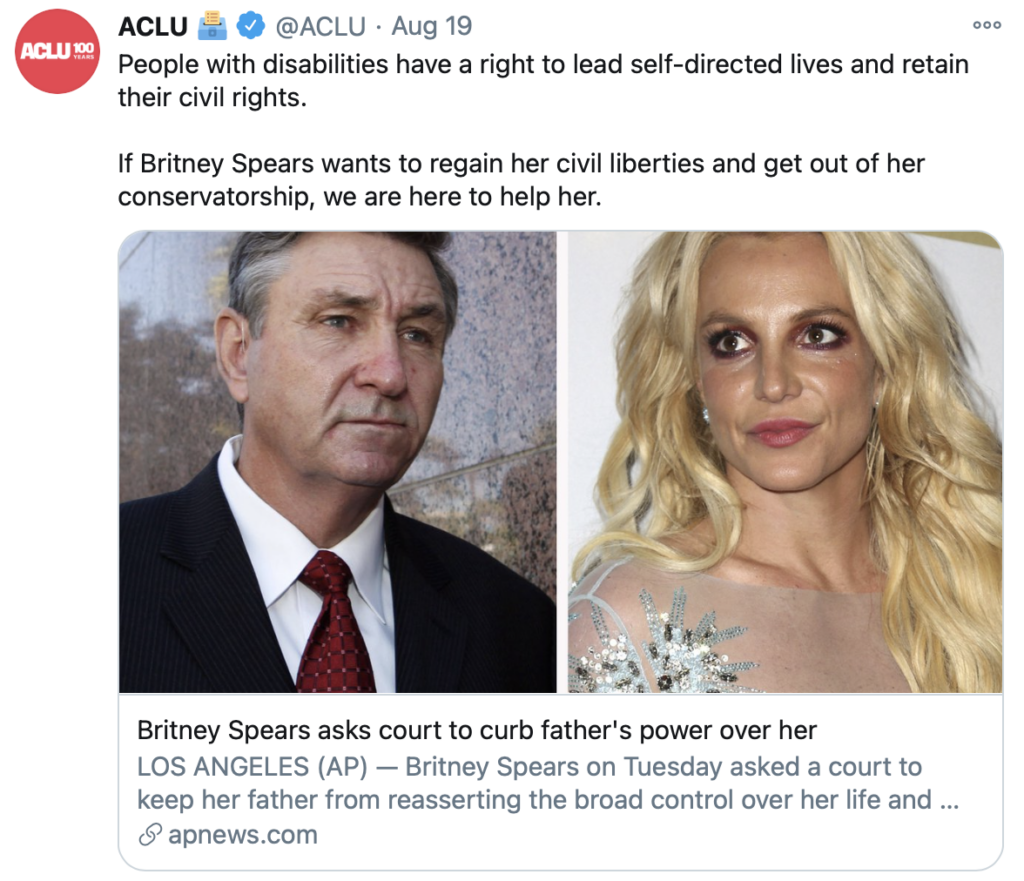 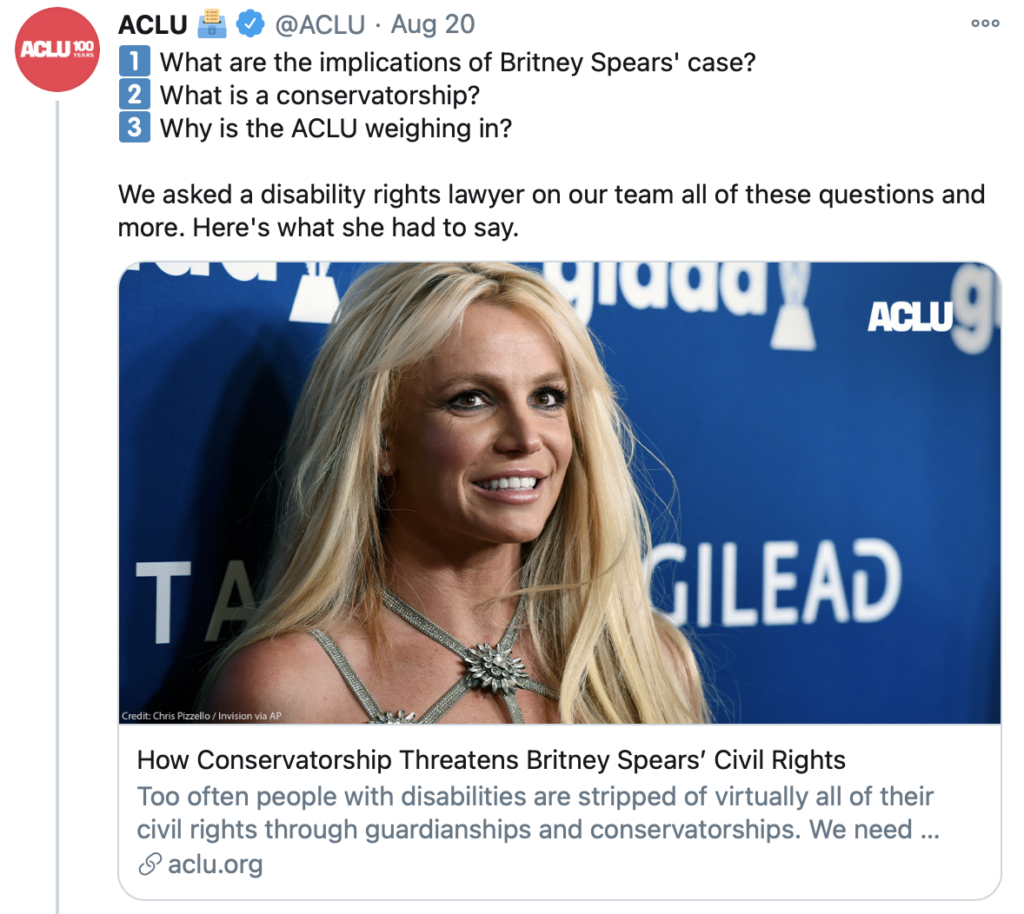 THE WHOLE WORLD IS WATCHING

Last month, after weeks of speculation on how Spears truly felt about the situation, her court-appointed lawyer laid out her thoughts in court documents, which included requesting transparency in the case. In the court documents he wrote, “At this point in her life when she is trying to regain some measure of personal autonomy, Britney welcomes and appreciates the informed support of her many fans…Transparency is an essential component in order for this Court to earn and retain the public’s confidence with respect to protective proceedings like this one. In this case, it is not an exaggeration to say that the whole world is watching.”

2020 has proven it can disrupt a lot, but it can’t stop the power of social media. Through the tenacity and vigor of thousands of concerned fans across the world, Britney Spears might finally have her civil liberties reinstated after almost 13 years, something everyone has a right to. The legal battle to eventually free Britney from the conservatorship is just beginning. The court case is ongoing and a final decision on whether or not her father should be permanently removed from the conservatorship won’t be decided on until at least 2021. Hopefully looking back on 2020 in a few years, Britney, along with the world, can sing the lyrics “stronger than yesterday” like never before.

For more information on guardianship abuse, please watch the 2019 documentary The Guardians.