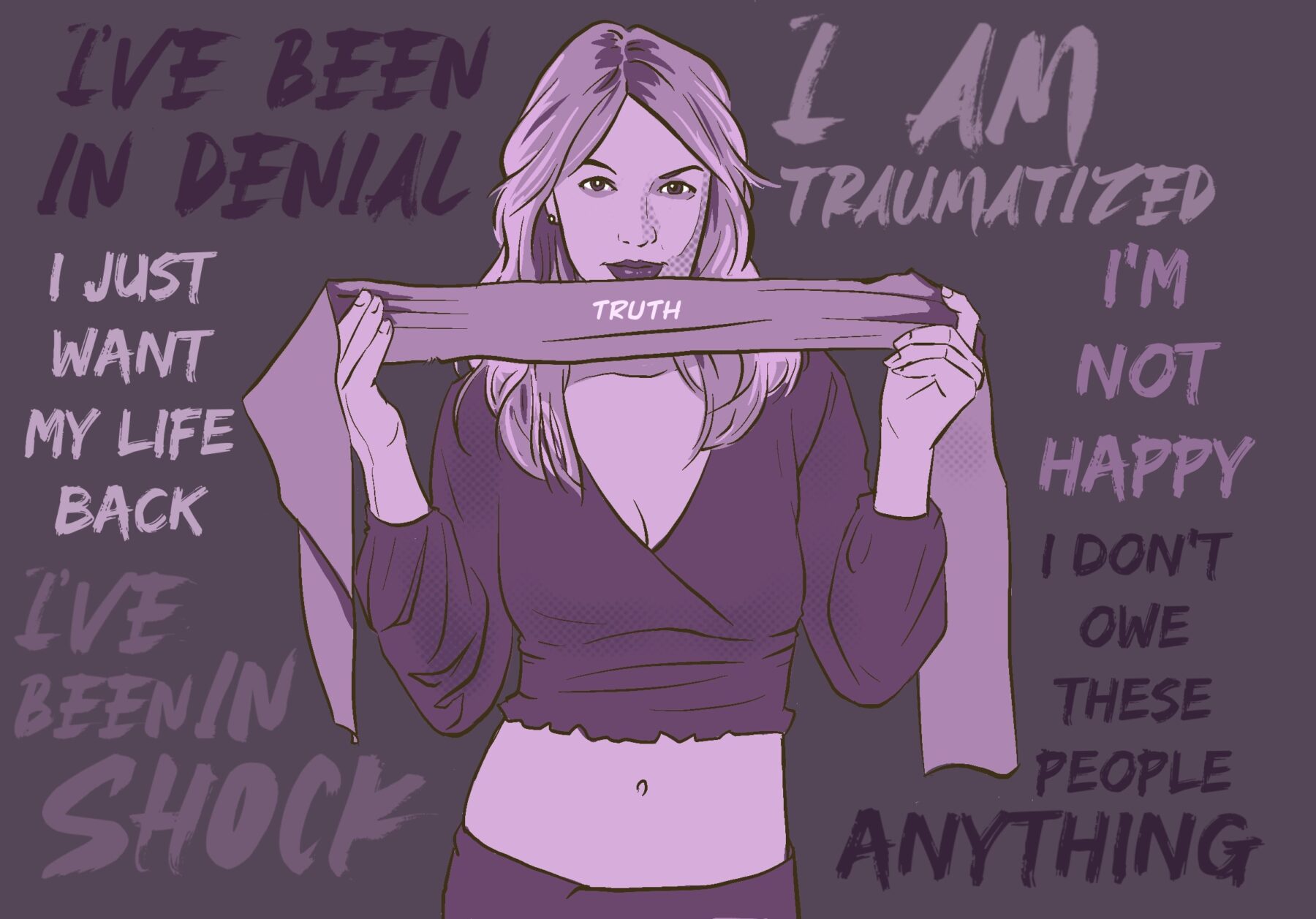 In 2004, Britney Spears’ cover of “My Prerogative” posed this question in its intro: “People can take everything away from you, but they can never take away your truth, but the question is, can you handle mine?” Well on June 23, Britney finally spoke her truth to the world.

Dialing into the Los Angeles Superior Court, Spears spoke confidently and ferociously as she detailed her harrowing experience living under a conservatorship. The statements pointed directly towards her father Jamie Spears, and others who have been in charge of her personal and financial decisions, including a reported nearly $60 million fortune, for over 13 years. In California, “a conservatorship is a court case where a judge appoints a responsible person or organization (called the “conservator”) to care for another adult (called the “conservatee”) who cannot care for himself or herself or manage his or her own finances.”

Before the June 23 hearing, there was an immense amount of speculation regarding what Spears would exactly say. She hadn’t openly spoken about the conservatorship since the 2008 MTV documentary “Britney: For the Record,” where she described the legal arrangement as “too in control” and likened it to “Groundhog Dog every day.” Additionally, through the years, her management had consistently reassured the public that she was content being in a conservatorship. Leading up to the court hearing, many assumed she would reiterate what her lawyer had previously stated to the court since last year: “My client has informed me that she is afraid of her father. She will not perform again if her father is in charge of her career.”

The spotlight on Spears and her case reignited following the premiere of the New York Times documentary “Framing Britney Spears” in February. The documentary reexamined the public’s fascination and overly critical scrutiny of Spears’ life and struggles during the mid-2000s and the #FreeBritney movement’s mission to release her from what they deemed an “illegal” conservatorship. The day before the hearing, the Times dropped a bombshell report. According to their article, Britney had “expressed serious opposition to the conservatorship earlier and more often than had previously been known, and said that it restricted everything from whom she dated to the color of her kitchen cabinets.” The article confirmed many concerned fans and members of the #FreeBritney movement’s long-standing suspicions, including that Spears was not happy with the arrangement, the conservatorship was not acting in her best interest and that she always wanted out of it. According to the Times, “conservatorships should prioritize the wishes of the conservatee and help them regain their independence. The arrangements are supposed to be a last resort for people who cannot take care of their basic needs, such as those with significant disabilities or older people with dementia, yet Ms. Spears has been able to perform and profit for more than a decade.”

Once Britney began giving her statement, it was clear that no one could have correctly predicted what she would say. Reading off from a four-page letter, Britney spoke for 23 minutes. She revealed many chilling revelations, including that she wanted to sue her whole family, wasn’t happy being under the conservatorship, was forced to take medication against her will and unable to marry or remove an IUD to have children. She went on to say, “I just want my life back…All I want is to own my money…I deserve to have the same rights as anybody does, by having a child, a family, any of those things, and more so.”

As soon as Britney finished giving her statement, the internet immediately went ablaze. A full transcript of her statement was posted on the Times and Variety online for people to read and the audio was uploaded to YouTube (as of this writing, the audio has garnered more than 3.5 million views.) On Twitter, users were quick to turn #FreeBritney into a top trending topic leading up Spears’ appearance as a sign of support and it blew up even more so following the hearing. According to Billboard, “More than 1 million tweets about Britney Spears were shared on Twitter’s platform…[and] over 500,000 messages were posted using the #FreeBritney hashtag, and upwards of 150,000 tweets used #BritneySpeaks,” all within 24 hours of her court appearance. TikTok, which was one of the original platforms that made Britney’s situation go viral, continued to be a popular place for the topic to be discussed. Users shared videos of the audio of Britney’s statement and their reaction, many of which went viral. As of this writing, the hashtag #FreeBritney has been used over 1.3 billion times on TikTok alone.

The story even hit the major news cycle and was discussed the following day on all of the morning news shows. During a taping of The View, co-hosts shared their opinions on Spears’ statement during their daily “Hot Topics” segment. Meghan McCain stated that she believed Spears’ situation had reached a level where the FBI should be involved and considered it to be a “human trafficking issue.” This past Saturday, award-winning journalist Ronan Farrow and staff writer Jia Tolentino released an explosive investigative report for The New Yorker, detailing the conservatorship nightmare Britney has been entrapped in and struggling to be released from for years. Among many of the startling revelations revealed in the article include that Spears made a 911 call to Ventura County law enforcement the day before her hearing to report conservatorship abuse and how the initial proceeding to establish the conservatorship in 2008 took “maybe ten minutes. No one testified. No questions were asked.”

THE BATTLE HAS JUST BEGUN

In the two weeks since Britney’s appearance, there have been a lot of discussions, emotions and outrage regarding her situation. For one, members of the #FreeBritney movement felt “vindicated” after being dismissed as “conspiracy theorists” for so long. According to Time, who spoke to a member of the movement, “We knew some dark stuff was going on behind the scenes, but to actually hear it from her own mouth and hear the pain in her voice was honestly heartbreaking. I was going through all the emotions. I was sad. I was angry. I was happy that she was actually speaking her truth. It was a whirlwind.”

Spears’ situation has been categorized as a disability, civil liberties and women’s rights issue. Many have even posed the question, “If a white blonde pop star and one of the most famous people in the world can have their rights taken away from them, where does that leave other individuals (especially people of color) with fewer resources that find themselves in a similar situation?” According to the National Center for State Courts, “there are 1.3 million adults under guardianship in the U.S. and…guardians control about $50 billion in assets.”

Last week, Senators Elizabeth Warren and Bob Casey delivered a letter with several requests to the Department of Health and Human Services and the Department of Justice, following Britney’s court appearance that made headline news. In the letter and requesting a response by July 14 they write in part, “Ms. Spears’ case has shined a light on longstanding concerns from advocates who have underscored the potential for financial and civil rights abuse of individuals placed under conservatorship…[it’s] imperative that federal officials work collaboratively with state courts to identify gaps in our understanding of problems with America’s guardianship system and develop solutions to address them.”

Since Britney’s statement, there hasn’t been a petition to terminate the conservatorship, but the wealth management firm who was appointed co-conservator of her estate in 2020, her manager and court-appointed attorney, have all resigned within the last week.

Spears’ statement has shined a very much-needed spotlight on conservatorship abuse and reform. In California, bills such as AB-1194 and SB-724 are currently in the legislative process and if passed, hope to improve how conservatorships are handled in the state. Until then, Britney will continue to fight for her freedom, and it’s not an understatement to say that the whole world is not only watching, but fighting right along with her.

To learn more about the beginnings of the #FreeBritney movement and the documentary that reignited Spears’ case, please read Double Forte blog posts, “How the Power of Social Media Helped Bring the #FreeBritney Movement to the Forefront” and “No Damsels in Distress: The Aftermath of Framing Britney Spears.”