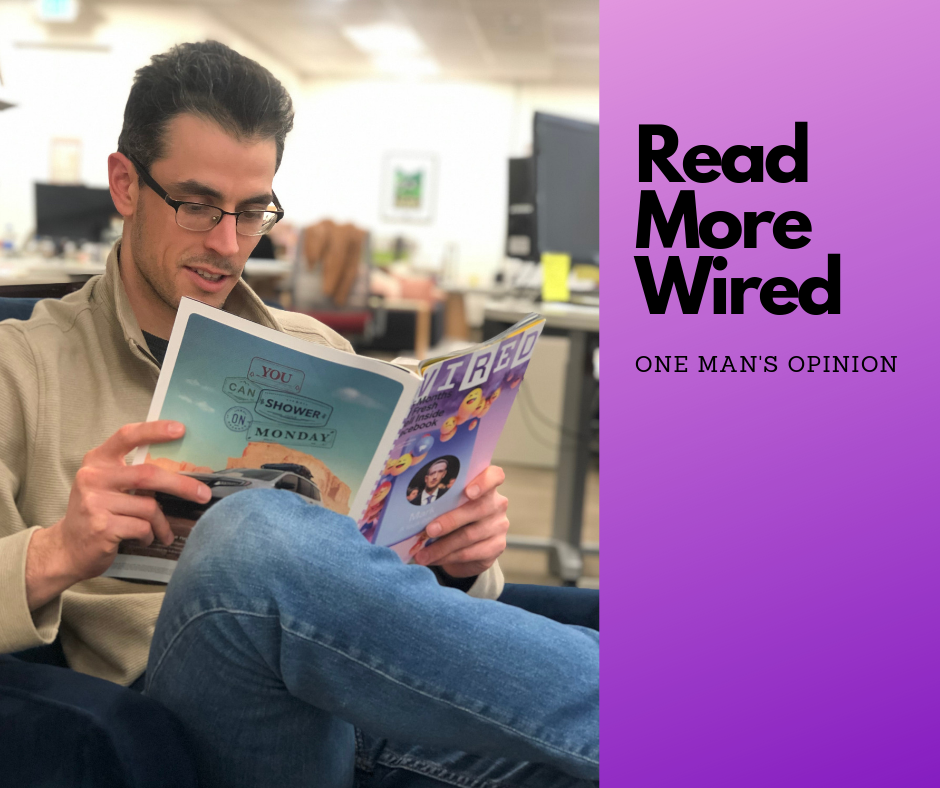 Every time I pick up a copy of the newspaper (yes I still read the physical newspaper) yet another long strand of facts confront me. I gather the basics, the who, the what, the where, etc, and proceed to a series of quotes. This is standard news format (more on writing here.)

I do my best to make sense of it all, but often I finish reading with facts but fall short of  knowledge.

Traditional journalistic reporting shies away from context. It provides the information necessary to understand the situation, but not the implications of the situation for fear of appearing partial. These heavily ingrained journalistic norms are unlikely to disappear anytime soon (at least among legacy newspapers like The New York Times). However, there are a few outlets that tip toe around traditional reporting and do so responsibly. WIRED Magazine, an outlet that reports on the relationship between technology and society, utilizes long-form narratives to create comprehensive content that informs.

Unless we’re talking pure mathematics, facts have antecedents — they do not exist in a vacuum. An unemployment percentage may seem impartial but tangled inside that percentage are all the partialities of policy, events, and customs. Oftentimes, journalistic articles assume readers have brains like the Britannica; however, WIRED Magazine is a little more generous.

For example, LA’S PLAN TO REBOOT ITS BUS SYSTEM—USING CELL PHONE DATA, includes numbers but also the context in order to understand those numbers. Reporter Adam Rogers provides the facts of declining transit ridership retrofitted with historical events including the 2008 recession which reduced car loans, and a 1980 Tax Proposition that raised public ridership by 100 million in just 5 years.

Rogers concedes that these historical anecdotes are no definitive explanation or solution, but they give the average reader the extra tools to think larger than numbers, and to draw connections in a world that is so very interconnected and intertwined.

It’s rare to come across a WIRED Magazine story that reads like the sterile tone of AP style. WIRED’s long-form style adopts journalism’s castaway, the adjective, and comes complete with characters, a plot and story arc.

The dark but captivating story, IF YOU WANT TO KILL SOMEONE, WE ARE THE RIGHT GUYS, follows husband and father Stephen Allwine and his incessant attempts to carry out a hit on his wife via the dark web. Covering a period of nine months, readers experience the ordinary life of Allwine and his family, his numerous dark web transactions, a failed FBI investigation and the subsequent County Police investigation (this time successful).

Prior to reading this story, I viewed the dark web as mere hyperbole for tales by the campfire. Now the dark web screams at me with implications. It is real, surprisingly accessible and heavily integrated in our mediated world. Through a plot that bares some semblance to our lives (murderers aside), WIRED is able to explain complex phenomenon in a way that is accessible. Doing so provides us a beacon of reference, a way to understand the implications of something even if we have not personally experienced it for ourselves.

With an average reading time of 20 minutes per story (my own estimate), WIRED lacks brevity but makes up for it in comprehension and understanding. Traditional reporting should not be shunned — it is important; however, it needs to be supplemented at times. WIRED is that supplement, and a trusty one too. It’s articles are linguistically appealing and mentally stimulating.

In today’s age we are drowning in information so allow WIRED to cast its raft and provide some traction in today’s current.

By Devin Cuevas, Intern. He has a strong opinion we share.