When the third, seventh and nineteenth most followed users on Instagram (totaling over 882,000,000 followers) publicly state that your app has a problem, it might be time for a change – or is it too late?

On Monday, July 25th, Kylie Jenner and her sisters, Kim and Kourtney Kardashian, shared a meme that instantly went viral after being posted on their Instagram Stories. The meme stated, “Make Instagram Instagram Again. (Stop trying to be TikTok I just want to see cute photos of my friends.) Sincerely, Everyone.”

According to Gizmodo, the meme was created by a 21-year-old influencer and photographer, named Tati Bruenig, after she became “annoyed over the fact that she was only seeing a seemingly endless stream of Reels, even though she wasn’t in the Reels tab.” The meme, done in part as a joke, was accompanied by a Change.org petition, which includes a number of Tati’s demands, stating that the goal of the petition, “is to bring attention to what consumers want from Instagram and to start a conversation surrounding the health of our beloved app.” The Change.org petition has since garnered over 287,000 signatures.

Since 2016, Instagram has slowly been making substantial changes to the app and user experience. First, it began using a software algorithm to help populate users’ timelines, which showed posts “based on what Instagram thinks you want to see, not just the newest posts first.” This replaced the much-lauded reverse-chronological timeline, which the company recently “brought back” but it isn’t implemented in the same way. Later that year, Instagram introduced Stories, also known as the “Snapchat clone,” which would “fundamentally change the nature” of the app and at the time, had over 300 million daily users. Less than two years later, Instagram began “pivoting” to video with the introduction of IGTV in 2018, which was a standalone app and was introduced as a way to watch “long-form video from your favorite Instagram creators.” By June 2018, Instagram was a global community of over one billion users.

Instagram’s biggest move into video came in 2020, with the global launch of Instagram Reels, which was positioned as a direct competitor to TikTok. Like TikTok, Reels lets users “record videos up to 15 seconds long and add popular music, as well as an array of filters and effects.” In another nod to the short-form video app, Instagram “revamped its Explore page to create a specific landing spot for Reels at the top of the screen that people can vertically scroll through – similar to TikTok’s “For You Page.”

Since the implementation of Reels, Instagram’s algorithmic feed has only gotten worse. Instagram began “recommending” posts from users you didn’t even follow and inserting them into feeds, completely outranking posts from people you actually choose to follow. This all came to a head last week when the Jenner / Kardashian clan shared the memes and collectively said “the new Instagram sucks.” The next day, the Head of Instagram, Adam Mosseri, shared a two-minute video on Instagram and Twitter, conceding that Instagram’s new feed wasn’t at its best and that recommendations could be better. The video went viral on Twitter and many users took the opportunity to share their frustrations with the app directly with its leader. The video has since been retweeted almost 10,000 times and has over 2 million views. Mosseri later confirmed that “Instagram would reduce the amount of videos being pushed towards users from accounts they do not follow and would stop trialing a full-screen mode for viewing posts.” 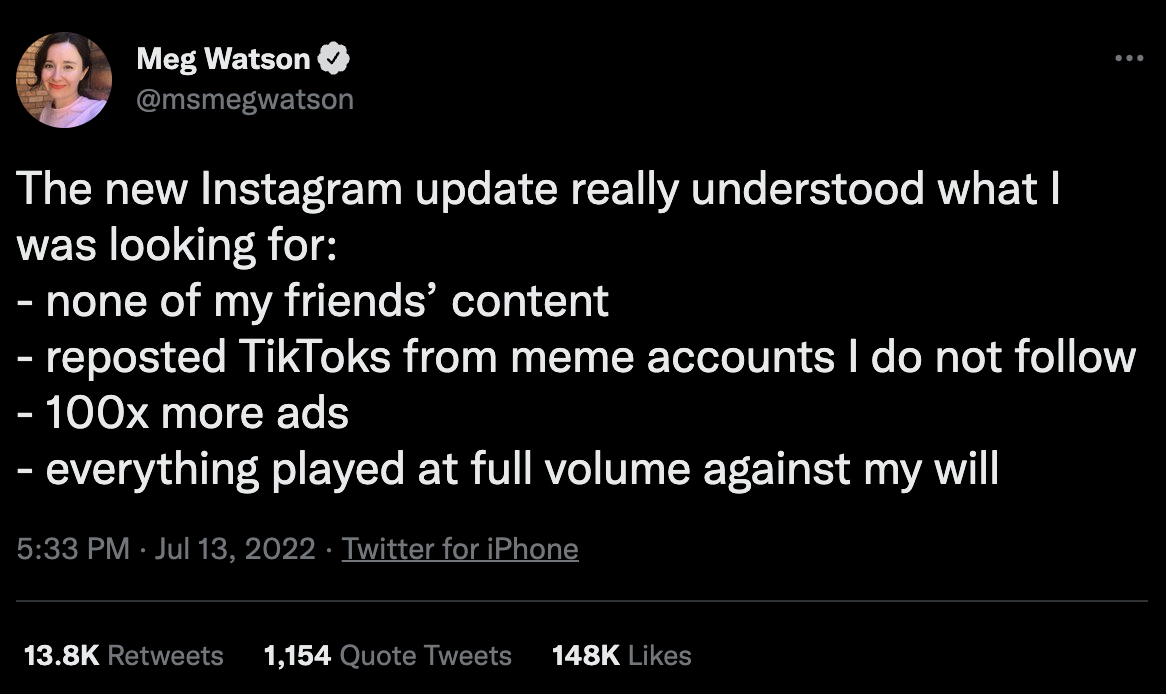 TikTok and BeReal Enter the Chat

As Instagram continued to diminish its product and aggravate its user base, TikTok seemingly swooped in just at the right time. Due to its convenience, ease of use and “scary-good recommendation algorithm” the app “is seemingly made for today’s younger generation” says Kenny Trinh, managing editor of Netbooknews. “[Gen Z] are most of the time glued to their smartphones and bored. It’s appealing to their short attention span, plus the short comedy video clips are comfortingly familiar as it’s the same type of content all through the app.” It’s no surprise then that by September 2021, TikTok reached over one billion monthly users and according to Forbes, became the world’s most popular web domain by December, surpassing Google and Facebook.

It was only a matter of time before the “anti-Instagram” app came along and that’s where BeReal came about. BeReal, founded in 2020 by French entrepreneurs Alexis Barreyat and Kévin Perreau, has users “every day at a different time…simultaneously…capture and share a photo in two minutes” using their front and rear-facing cameras – no filters or edits are allowed. Users are only allowed to see their friends’ photos after posting their own. In addition, The New Yorker noted that “photos taken after the two-minute window are marked as late, and metadata reveals how many times a photo has been retaken before the final image is posted–an element supposedly designed for the sake of transparency.”

BeReal is hyper-focused on users sharing authentic and real experiences with their friends, so much so that in its marketing materials the app warns, “BeReal won’t make you famous. If you want to become an influencer you can stay on TikTok and Instagram.” The app seems to be resonating with users, as it recently reached the #1 spot on Apple’s App Store (now at #2). The app is still in its infancy, however, that hasn’t stopped it from receiving big funding from investors. According to Insider, BeReal “is raising $85 million in fresh capital, led by DST Global, that would value the company at $600 million.”

Only Time Will Tell

It’s hard to say if Instagram will ever return to what made it popular in the first place: a space for people to share photos with friends, family and the world (if they choose to). However, it continues to be the go-to place for brands and celebrities to promote their work. In fact, Beyoncé, who has over 270 million Instagram followers, first “hinted” that new music was coming by changing her profile picture to black (she eventually announced the release of her seventh studio album, RENAISSANCE, in a post). For other celebrities, like Britney Spears, the platform is a way to share unfiltered musings and photos with fans, after being “forbidden” to do so for years.

While it continues to be one of the most popular social media platforms in the world, its cultural relevance is slowly chipping away as competitors, like TikTok and BeReal, gain in popularity. Only time will tell how relevant Instagram will be in a few years, but like Gen Z’s attention span, the amount of time is short and the clock is already ticking.