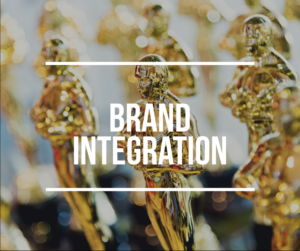 The biggest winners from Sunday’s Academy Awards don’t even have SAG cards.

They weren’t dressed in designer couture – didn’t even walk the red carpet, or give the camera a coy wink from their seats. No, in fact, they didn’t spend a single dime to be there, and still they left the ceremony rich with press coverage and social media mentions. Ladies and gentleman, the envelope please. We’re declaring Kawasaki and Day’s Inn the real winners of the Oscars in the category: Best Brand Integration.

Other brands paid as much as $2.8 million dollars for a 30 second ad spot during the Oscar telecast. Yet Kawasaki and Day’s Inn, without a doubt, received more air time and brand mentions by some of the most influential people in Hollywood for free. How exactly? Through a punch line. Jimmy Kimmel announced in his opening monologue that whoever delivered the shortest acceptance speech (thus keeping the telecast within a bearable length of time) would win a brand new jet ski – and then a curtain lifted to reveal the actual 2018 Kawasaki jet ski on stage, a la the Price Is Right.

The production team for the Academy Awards did approach Kawasaki two weeks prior to the telecast, asking if they’d like to provide a jet ski as a prize associated with the shortest acceptance speech. In a risky, but ultimately genius move, the marketing team at Kawasaki won the evening. Why risky? Well, for a product integration like this, our hunch is that Kawasaki couldn’t have been guaranteed  exactly what Kimmel would say about the brand, or how the audience would react.

The integration paid off. The brand was mentioned or alluded to several times throughout the award show, including having four of the evening’s prominent winners (Sam Rockwell, Jordan Peele Gary Oldman and Kristen Anderson-Lopez) reference it in their speeches. 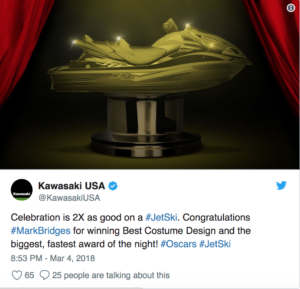 While Kawasaki was in on the gag, Day’s Inn was not given the heads up that they too, would be part of the host’s cheeky offer. The brand handled the inclusion beautifully and without hesitation, using a somewhat defunct Twitter channel to further control the conversation. “We’re so happy Jimmy Kimmel knows what we’ve always known: Days Inn makes for a memorable spot to get away from it all,” said Lisa Checchio, svp of Global Brands for Wyndham Hotel Group. “Last night’s shout out during the Oscars was unplanned and unpaid, and we saw a chance to jump on it.”

PR Week expands on a handful of other brands that stole the spotlight Sunday night. The Oscar’s example of (somewhat) unplanned brand integration is a great reminder for all PR and marketing teams that creativity, a little risk, and leveraging social media can really work to a brand’s advantage.